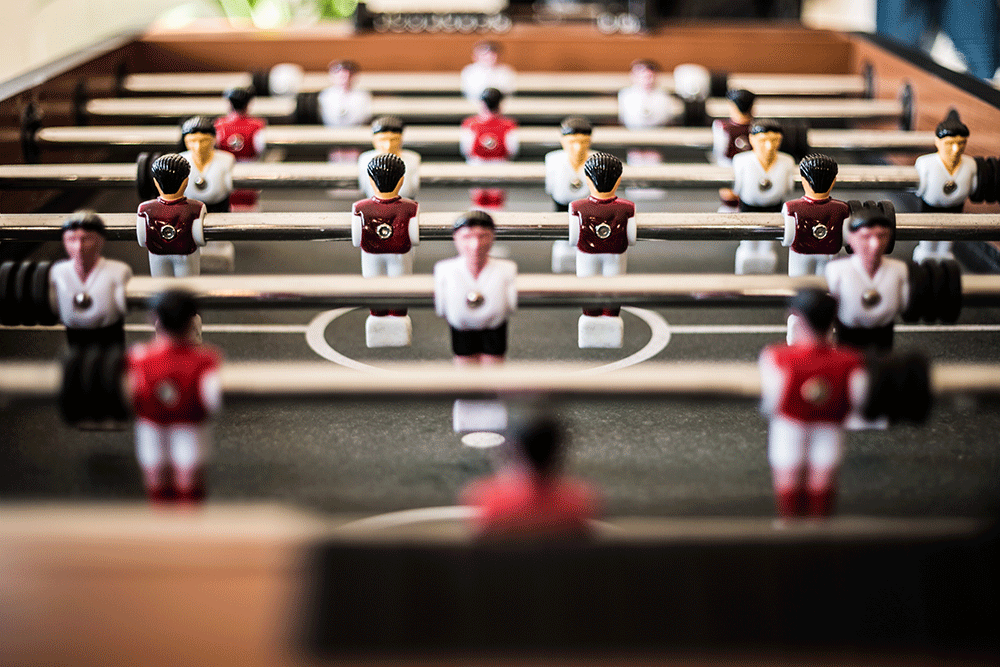 Why it failed: Slides are fun, but not practical or professional. It’s quite comical to watch an employee sliding down to reception to meet a client in a suit instead of opting for the more sensible staircase.

Alternative: Bleachers – think stairs but bigger. They are considered a collaborative feature associated with open-plan offices, allowing staff to sit and mingle on them as well as travel between floors.

These tables were the start of companies (mainly startups) injecting what they believed to be ‘fun’ into the workplace. It didn’t take long for them to discover that there are better (less annoying) options to provide a much-needed serotonin boost.

Why it failed: Ping Pong is a game that requires space to prevent the ball colliding with the walls or a colleague’s head.

Alternative: Smart Design – a communal area away from desks physically and mentally separates work from play. This is key to staff’s well-being and productivity.

When sitting became the new smoking, people went into a frenzy; the notion of not moving for the best part of nine hours suddenly became an issue they urgently needed to fix. The answer was to walk as you work, but there was nowhere to walk to – enter the treadmill.

Why it failed: Walking outside stimulates the brain and improves productivity. Walking at your desk results in getting hot and sweaty, as well as sounding out of breath on the phone; not ideal.

Alternative: Regular Breaks – a swift trot around the block every hour, a trip to the nearest shop or a full hour exercise class; whatever may appeal to you, the secret is to use your time wisely.

The most humorous one yet. It’s unclear how this trend started, but they did produce some difficulties. The balls left as soon as they arrived!

Why it failed: Getting up and sitting down was a challenge, let alone doing it gracefully. Being at the right height in comparison with your desk was also tricky/never happened.

Alternative: A simple office chair, when it ain’t broke…

Humans benefit the most from two sleeps within a 24 hour-cycle, giving designers the evidence they needed to offer somewhere for staff to squeeze a 20-minute power nap into their workday.

Originally, pods were targeted to companies that worked across multiple time zones and used by regularly travelling staff, but now Google, Nike and Uber have made theirs accessible to the whole team. Sleep pods could be an unproductive gimmick or a solution to the lack of sleep problem many companies face.

A design fail or stroke of genius? You decide:

Staff do need a place where they can step back from their to-do list and take a little time to unwind and recharge. According to the BBC, sleep deprivation costs the UK £40bn a year, sleep pods could be a solution. However, a nap during the day can induce sluggishness, whereas a coffee bar or meditation room/gym/yoga studio are alternatives. Also, introducing agility and flexitime to a business enables staff to manage their own time and workflow.

So, there you have it – 5 office design fails. What will the next trends bring to our ever-changing workplace?

Coworking: Why It Works